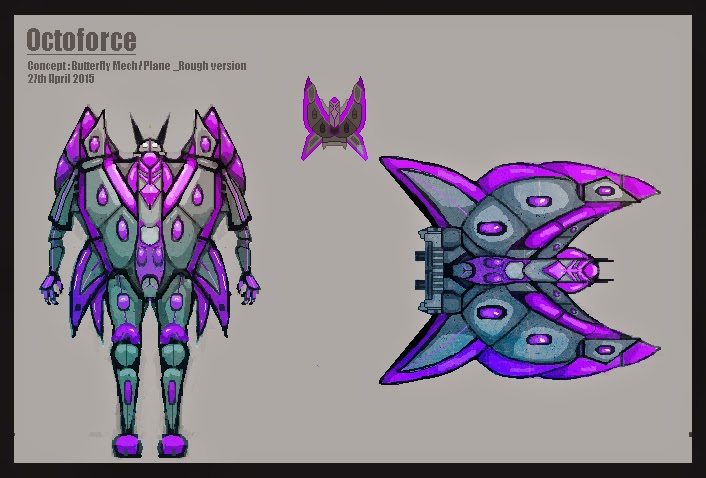 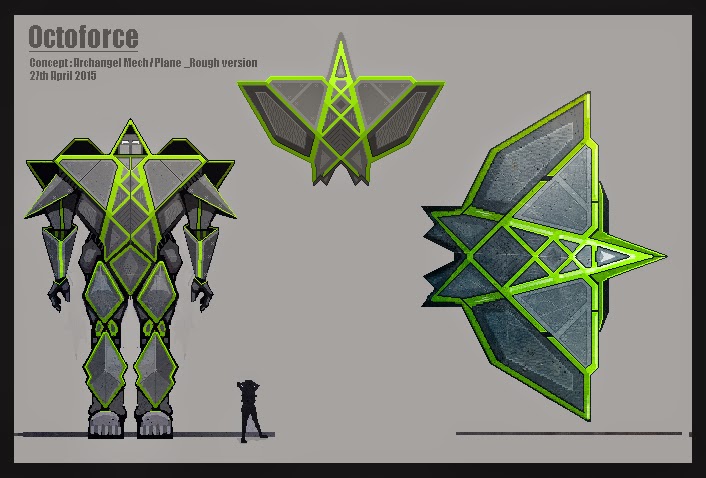 The Butterfly and the Archangel have been given their mecha forms!!!
at 3:34:00 PM No comments: 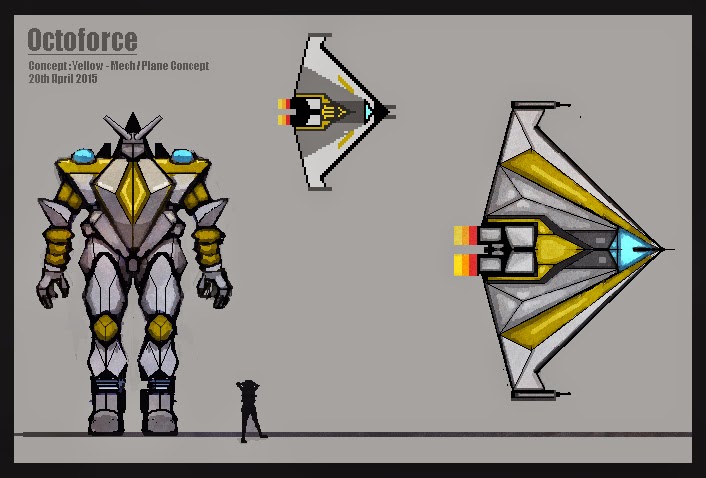 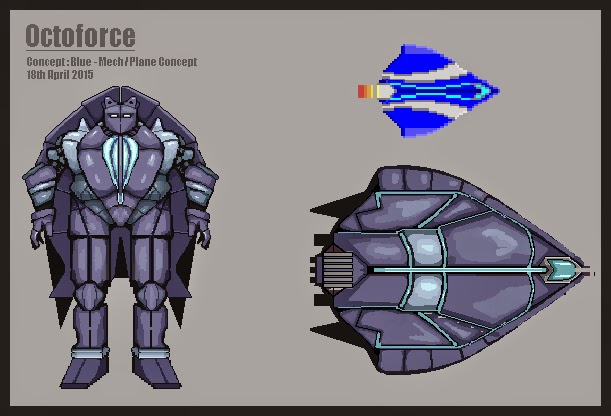 We need 4 Pixel Artists to join our enthusiastic team!

The gaming project that we are seeking artists for is...

[spoiler]
We are Silicon Sorcery Studios.

We started out as a father and son team from the San Francisco Bay Area.
We're both anime and gaming fanatics so doing something like this, together, was a no-brainer.
We are currently a team of four.

The OCTOFORCE story is a trilogy that revolves around military affairs, mecha fighters, nano-machines, alternate realities, and multiple universes.[/spoiler]

Aside from a load of incredible artwork....

As previously stated OCTOFORCE - The Paradigm Experiment is a trilogy.
We will be selling each part of the trilogy separately and then when it is all done the finished game will be repackaged and sold as one unit at reasonable discount. However, each of the smaller parts will still be sold separate, for marketing purposes.

Part 1 - The Arrival has roughly 7 levels

While the game is played straight-through, from one level to the next....

Three of the levels in The Arrival are purely action levels where the player must survive against razor sharp odds in WWII-style combat.

The specifics can be found in the Background Artists section[/spoiler]


Additional Art, screen shots, and an old demo (of level 1) can be found in the following links.

***NOTE:
IF you play our demo keep a few things in mind.

What we are looking for in our artists.


Art Standard:
The market are aiming for PS 3 and 4, X-Box, Wii, and Steam, therefore our art standards have to be high.


Art Complexity and Realism:
We are aiming for a Unreal Tournament 3, Hawken, and Megaman X8 level of realism and design complexity


The specifics are categorized (below) by what we need from each artist.[/spoiler]


[/spoiler]Level of artist:
intermediate to expert

Artists must have a keen eye for realistic backgrounds, details, and shading.

Artists must have an imagination that eats and bleeds science fiction.

We need artists that can digitally draw scenes from their favorite sci-fi flics and people will say: "Nice screen shots". (but they are not screen shots...)

We want our gamers to forget that they are just playing a game.

Furthermore, we need background artists that can take rough drafts (like the one below) + level designs and create breathtaking level art.

We need 3 levels with top down views:

For the levels with top down views they have a resolution of 1200x900y.
While the resolution allows for more preparation of the player, during combat, the levels are much bigger in size, requiring the player to fly long distances and scout out areas to achieve victory.
Each of the top down level is 1 Room each. Size: roughly 5000 x 5000 y.
Concepts for levels 1 and 2 are already completed.
Of the 3 top down levels...
Level 1 is in space above and surrounding the planet wherein the remaining game takes place.
Level 2 is located in a desert with high cliffs, sandy dunes, and laser fencing.
Level 7 takes place above a technologically advanced city.


We need 2 levels with side scrolling views:

For the levels with primarily side scrolling views they have a resolution of 1200x800y.
For the most part we do not want dead space in these levels.
Each of the side scrolling levels is a multitude of interconnected rooms, tunnels and switches that open doors and activate vertical lifts. 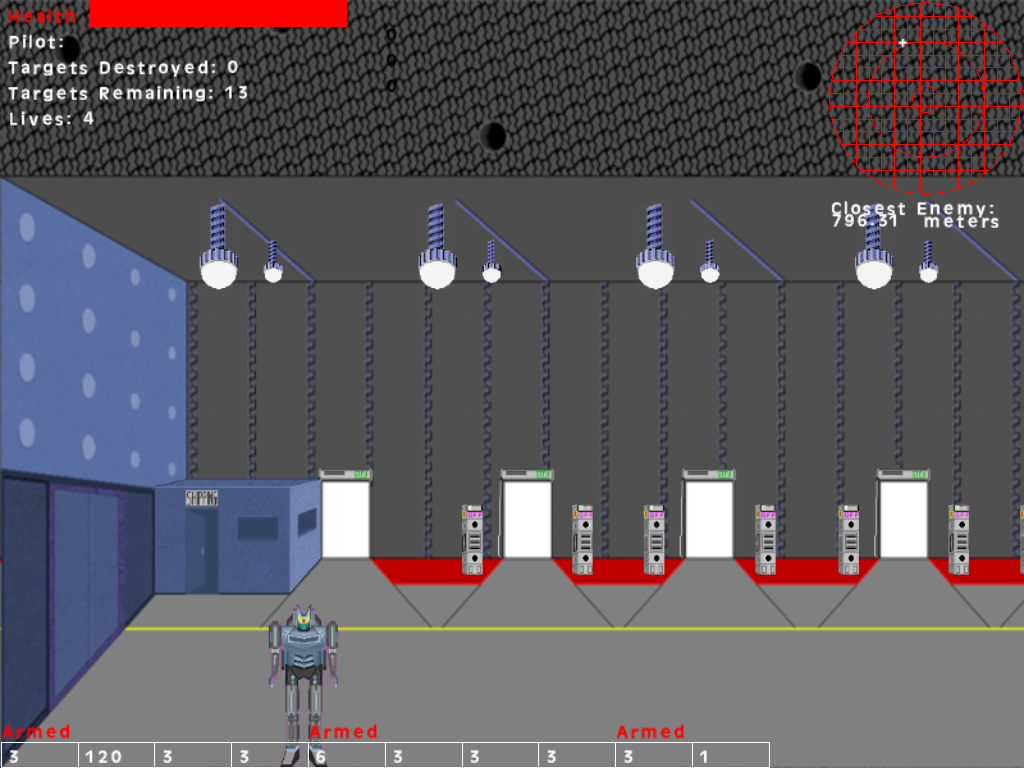 We need 2 level that combine side scrolling with Mode 7 Simulation:

These 2 levels will have a resolution of 1200x800y.
Each of these levels require an integration between side scrolling aspects with fake 3D viewpoints.[/spoiler]

In general:
We need several piloted and several non piloted robots for The Paradigm Experiment.

Artist must have a keen eye for interesting, science fiction-based mechanical designs


Particulars:
We have roughly 20 vehicles that will transform into mecha robots.

Most of the sprites will be between 50 and 250 pixels tall.

For those vehicles we need transformable robots with a side view, front view, and rear view of each robot with an approximate size of: 80x170y.

We also need 12 non transformable robots with side view and front view with sizes ranging from 60x85y to 80x200y.

[spoiler]Level of artist:
intermediate to expert

We have roughly 30 non-mecha vehicles that need detailing and shading.
Basically, these vehicles are still in their respective concept or prototype stages.

Particulars:
Some of the vehicles that are still in their concept or prototype stages need to be expanded to bigger size (2x their current size).

What kind of compensation are we offering?


[spoiler]
1. Credibility
Your name will be in the credits at the end of the game.


Every game can be broken down into four equally important parts:

However, if each of the other three parts are 33% each...

...and you as an artist do half of the sprites then your share would be 16.5% of the game's profits and royalties.

Our leader has experience writing contracts, so if you wish to have one (to guarantee payment upon successful marketing of game) that will be no problem.
[/spoiler]

[spoiler]
When you contact us please include the following info:

Contact:
For the sake of convenience and quicker replies from us, please contact us through email:
neurothougthmachine@gmail.com.

We will not answer to replies in this post. There are simply too many trolls and pessimists on the net.

If you have any questions please don't hesitate to email us.
at 2:11:00 PM No comments: